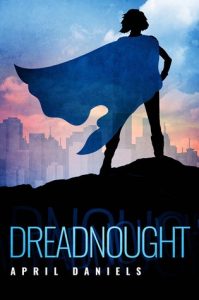 If “trans lesbian superhero YA” makes you think “queer escapist romp,” you would have the same idea as I did going into Dreadnought. And although I don’t regret picking it up based on that, I got the “escapist romp” inference entirely wrong. This is a book that deals directly with intense transphobia (especially transmisogyny) and abuse. To give you an idea, here’s a line from the first few pages (trigger warning for suicide): The dirty little secret about growing up as a boy is if you’re not any good at it, they will torture you daily until you have the good graces to kill yourself.

Danny has enough on her plate just trying to survive her abusive household while being a closeted trans teenage girl. She has ducked behind the mall to secretly paint her toenails–her only avenue of self-expression–when blue lasers explode around her: Oh. Great. A superhero fight. Just friggin’ wonderful. It turns out to be Dreadnought, the world’s most powerful superhero, locked in combat against an unknown enemy. The fight turns deadly, and Danny pulls a wounded Dreadnought to safety–but it’s too late, and Dreadnought passes his abilities on to Danny just before he dies. Danny gains access to the “lattice” behind reality. She immediately uses this to shape her body into her ideal version of herself, but this also means that she has super strength, can fly, and can influence reality in ways she’s not fully aware of.

Being a superhero doesn’t mean that she escapes the problems she had before, though. Although she relishes being in a body that other people recognize as her gender, being a cape comes with risks–and the superhero community has its own transmisogynistic assholes. This isn’t escapist utopian fun: it’s battling bigotry armed with superpowers. And although initially she feels like no one can hold her back, she quickly finds out that her father’s vitriol can still get under her skin (even though bullets can’t).

This is a catharsis fantasy. Danielle fights the bad guys both in her cape identity and in her everyday life, and it makes her victories even more triumphant. This is about pushing through unimaginable pain and conquering it, surviving, maybe even emerging stronger.

I really enjoyed this and am looking forward to the next book, but I do want to emphasize that this should come with some major trigger warnings. Danielle deals with suicidal thoughts. There is a ton of transmisogyny, including slurs. Her father is extremely verbally and emotionally abusive, and the poisonous words he uses are on the page. There were also a few notes I wasn’t sure about: the origin of superheros/villains in this book is Hitler’s Ubermensch, including a villain called Kristallnacht. Would like to hear Jewish reviewers’ thoughts on that. There was also a moment of ableism near the end (vague spoilers), where Danielle shows disgust towards someone (one of the villains) without arms and leaves them face-down on the ground. (On a more minor note, some of the dialogue did seem stilted to me, but it might be because I just don’t want to believe that people would say such heinous things, and I believe the author did mention that some of it is word-for-word what was said to her, so that’s likely just me as a reader.)

I still would recommend this book, but don’t expect a fluffy read! Also, Danny does mention that she’s a lesbian, but there isn’t a romance in this volume (though there is a ship I hope will sail in the next one!), and her sexual identity plays a pretty minor role beside her superhero and trans identities.