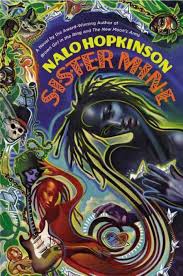 It’s hard to describe a book like Sister Mine. It would probably suffice to say it is just as surreal as the cover would suggest, but I’ll make an attempt anyways.

Makeda is a twin–originally conjoined twins–and is trying to strike out on her own. She and her sister have always been very close, but Makeda is sick of Abby’s controlling and overprotective attitude. It doesn’t help that while they are both mortal demigods, Abby has a magical gift with music, while Makeda is left with no mojo at all. She wants to make it on her own in the claypicken (human) world–but it’s not easy escaping from her supernatural family, when the unreal seems to follow her around.

There is a lot going on in this book. While it starts off following Makeda’s attempts at getting an apartment and establishing a “normal” life for herself, it quickly slides back into Fantasy. She’s being followed (hunted?) by a haint, her sister is dating the magical embodiment of Jimi Hendrix’s guitar, her mother is cursed into being a sea monster, her father is temporarily human and has Alzheimer’s, and there’s something unnatural about her apartment complex. Phew.

Although there’s a ton going on in terms of gods, mojo, and the Fantasy world-building, Toronto as a setting is given just as much detail and life, which includes addressing the casual racism that Makeda deals with in the claypicken world.

Nalo Hopkinson throws you into the deep end in terms of introducing characters and lore. I wasn’t always completely sure what was going on–especially with the revelations around Abby and Makeda’s birth–but I was always immersed and fascinated. I love her writing. Everything I’ve read by her has been surreal and sometimes overwhelming, but always satisfying.

The queer aspect to Sister Mine requires a little bit of explanation that may be considered spoilers. Basically, the gods and demigods in this world don’t have a lot of qualms about sex and romance, which means that basically they’re all polyamorous and pansexual–oh, and also have sex with family. So even though Makeda in her claypicken life doesn’t seem to have any romantic or sexual interest in women (and makes a gay joke at one point?), she does have sex and date god/demigod women. Including her twin sister. To be honest, it made sense while I was reading it, and it didn’t occur to me until afterwards that it might be controversial.

If you’re looking for a surreal, immersive read, this is definitely one I would recommend.